My first ever B-Plan 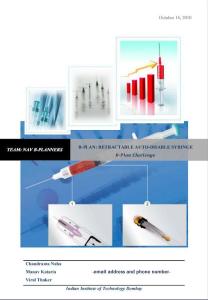 Avenues is the Annual Business Fest organized by SJMSOM – the School of Management at IIT Bombay. They have a Business Plan Competition called Navonmesh which works on a unique model of bridging real innovations to a well honed business plan.

The competition lists innovations that have a potential for success but lack a good business plan around them. The innovations were primarily selected from:
Department of Scientific and Industrial Research > Technopreneur Promotion Programme

The first step for the participants was to select an innovation to work from the list given by organizers and make an executive summary around it. We choose to work on “Retractable Auto-Disable Syringes” innovated by a Doctor.

They are basically Single Use Safe Syringes and have a huge potential market in India. The competition is significant but there is scope for big success!

Our Executive Summary (3-pages) made thru the initial screening phase, second only to ISB, Hyderabad. We were then required to come up with a comprehensive Business Plan (24 pages) addressing the specific pain points of the innovator.

Our Team: Chandrama Naha, Viral Thaker and Me

It was amazing to see how each of us adapted and relatively became experts on-the-fly in the domain we started to work on:

It was a lot more fun that I’d ever imagined! With all the discussions, fights, disputes and still sticking together! 😉 😛 And to have moved a step closer towards real-world entrepreneurship.

It wouldn’t have been possible without Viral and Chandrama. Kudos to them! And special thanks to Disha and Aaron for all their support! 🙂

Day 1:
Juggling Workshop
DAY 2:
Got up very late today. Participated in a Photography competition “Papparazzi”; Disha was the celebrity and I was a Papparazzi. And then Pool Side Dance Party!… It was not as nice as last time but it became fun later on..
ProNight: Classical Night
“Event jab tak Pure Classiscal tha, to jyada chamka nai. Fir gazal singer aaya, aur Jhulelaal bajaya to khoob mazaa aaya!”
DAY 3:
What a day! One of the best experiences at Moodi, ever!
I had planned to do a bank robbery ‘the Heist’ and then attend the DJing workshop.
Unfortunately I didn’t get a chance to do anything at the Heist. We started discussin and forgot to complete the obstacle track in time. So we got disqualified! 😛
The Djing workshop was good. I got hands on at the Pioneer NewAge Mach3. We attempted to catch the first beat of every a bar in a track. We also saw a demo of some good mixing.
They had a Rock Climbing Wall and an obstacle course at the NCC grounds. There was also a mental task to be performed alongwith.
I also got a Tatoo today!
<photo>
ProNight: Fusion Night
Raghav Sachar and Alms for Shanti
Convo:
A brillian performance by folks from Israel! Fantastic Music using unconventional tools. Exhilarating performance! I can’t explain it!
<videos>
NCC Roads:
Bike Stunt Performance
Day 4:
Nunchak Workshop. Good tricks, but it was too short.
The Workshop was good. Fir time pass raha. Attended an International Music performance.
< videos >
Doston ke saath masti ki. Aur Mess mai pani puri khai. Aur haan, I finally Climbed the OldSpice Rock Climbing Wall. Tried the obstacle course with Sagar: rock climbing wall, 8.5feet NCC wall and balance walking. It was fun! 🙂

Tech Event: Formula One – as we played it!

Congratulations to Freshers who participated in

It was a dangerous event there were many obstacles blocking the path, an uphill incline and a water pit thru which the car had to pass! They had made a wirelessly controlled F1-car with a very good speed and a torque suitable to climb a 30degree incline uphill! It wasn’t a bullet-proof car but definitely water-proof! 🙂

Unfortunately due to heavy rains on the track the road got slippery! One tyre rubber came off making our driver lose control and bang into the sides! The team struggled hard to keep the car under control and ultimately made it successfully to the finish line! Both the driver and the car are now safe! .. 🙂

Congratulations to them for being the only PG teams to have made it to the track and completed it!!

Oh! BTW, we witnessed Hostel 10 participation there as well! 🙂

Transformer disguised as a mobile

“A competition held at IIT Bombay as a part of Tech General Championship recently was to device a mechanical robot “Transformer” that fits in a 1ft x 1ft x 1ft volume and expands to a largest (enclosing) bounding box volume. There were no batteries allowed or any chemicals to be used. Your Transformer must only use stored mechanical potential energy! And to top it, all this had to happen with only single external trigger!” Here is the exact problem statement.

The hostels came up with some really innovative ideas and designs. They used everything from straws to springs to umbrellas to rock!

This was the first time H1 was participating in Tech GC. Nobody knows when was the last attempt. Their bot was impressive and as Sagar says, it casted a scary look on many other bots!

First Round – The Drama!