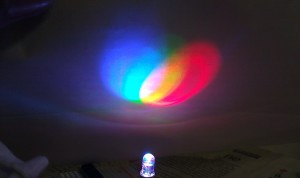 I am trying to make a simple fading LED lamp that fades-in and out multiple colors. I have 3 LEDs Red, Green and Blue in the same package. I turn them on simultaneously.

The combination colors were not very clearly visible. I haven’t made a diffuser yet. OK. I just placed a white envelope on it. The red being the most intense overwhelms the r+b, r+g and r+g+b with its color. Blue + Green looks sexy but I think I better diffusion would make it prettier.

I still would love to know

END_OF_DOCUMENT_TOKEN_TO_BE_REPLACED

Photos of the Month

These were clicked on Daa’s Birthday Party. The third one isn’t mine, but I love it! 🙂

Two simple bathroom designs I did for home:

Vishal Verma I can see how hygienic your laptop is going to be 😀 By the way, having an optical keyboard right in front of the pot wont be a bad idea. While you are ‘doing’, u can also chat with friends. Saves time. And moreover, the best ideas are born while you are on toilet seat…so good to have something non-tangible to capture the idea in that moment.

My touchpad driver was crashing quite frequently so I decided to uninstall it and upgrade to a new one thinking it would finally fix my problem!
And, did it?…

Remember those old science-fiction movies – and the eerie sound they made when a UFO floated-up in the Manhattan Sky — Yea? Well that’s how my touchpad sounds right now! Don’t believe me? Watch this video:

Credit goes to our cameraman Tej Vohra for his brave videography attempt to capture the aliens! 😉

Wow! What’s going on?!
The touchpad is now a musician playing Theremin.

What’s a Theremin? – Invented in 1919 by a Russian physicist, Lev Termen is a musical instrument that is played without touching it! This is what makes it easy to play but notoriously difficult to master!

The controlling section usually consists of two metal antennas which sense the position of the player’s hands and control oscillators for frequency with one hand, and amplitude (volume) with the other. (The electric signals from the theremin are amplified and sent to a loudspeaker)

Let me present to you, “Geeks Unleashed!”
(youtube link)

I want to make my own Theremin someday! It would be a so cool to have one at home 😉

Photos of the Month 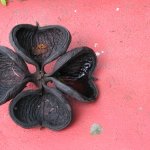 Last Saturday me and Vinay were planning to go join my friends and Chandu Mhatre for a Photography Session at Versova. We were late. We got up at 6:15am whereas we were supposed to start from IIT around 5:30. As we were about to leave, I got a call from my friends who were already with Chandu to ditch the plan! 😛

As we had already taken a morning bath (really!) — we were determined to go out! And hence we decided to click in IIT that day:

I visited the Heritage Park and the Glenn Society Park today. It is an interesting place and I got to see a diverse age group of people having fun: children playing, teenagers chatting and lot of the elderly jogging! They have done some landscaping and also (read hence) sprout a small pond there! 🙂

Wanna try out Hiranandani Garden next!

Have obstacle will Jump – Parkour

I was showing some Parkour videos to a friend when I accidentally stumbled upon the Parkour Mumbai Website.

It was heartening to see that Parkour has its presence in India/Mumbai. All I knew about Parkour was that 3Run Traceurs gave a stunning performance last year at Techfest. And this Russian Traceur video which I saw on the lan:

I always wanted to learn Gymnastics but never got a chance. Parkour does have that flavor. I really want to join the parkour training camp. But Kandivili is too far from Powai to reach at 6:00am every morning. I’ll have to settle for a weekend training program that they have 6:00-8:00am every Saturday.

Unlike my undergrad college an eclipse here is really a celebrated event!

Junta at the event

Krittika – Astronomy club of IITB actually gave solar filters and had even setup a telescope for us to view the eclipse closely.

Here are some snaps I clicked that day:

It is amazing to realize power of technology that lies within our hands today;
high zoom camera + solar filter = sunspots, observed by a common man!

And yes, there were a few, creatively-bent, willing to behold the power of the sun without any fear …

… and dare its true purpose!

More such images at:
http://www.spaceweather.com/eclipses/gallery_15jan10.htm

Thanks to AP (Anand Prateek) and Vishal Tanna for lending me their camera.

Climb the hill and a Party follows…

Sameer Hill Trek
It was “planned” by Arti, that all of CC (Control and Computing) students, MTech + PhDs would trek the Sameer hill top today. We started around 5:15 and came back around 7pm. It was wonderful up going up there again, and with new friends it was all the more better.

It gave us the opportunity to break the ice! Infact we even had a freshers intro up there at the top! 🙂

From my batch it was Imon, Nikunj and Me from M.Tech and Subhasis Dutta from Ph.D. There were a lot of juniors, viz; Rachel, Garima, Arti, Mayank Pandey, Sidharth Jain, Pratyush, Sandeep and one more I think. From the seniors we had Ram, Mandar, Debu da, and Swanand the “guide”

Imon wanted to rush back down and play football. Nikunj had to take a leak and was stuck up there with us! The rest of us were quite happy up there! We also met Neeli (Neelam) and Peeli (Priyanka) up there. It was a pleasant surprize!

IceCreams for Bhel
After we parted I realized I hadn’t had enough. And wanted more “masti” so I decided to meet the folks at BJC and have a bhel! BJC was closed so we ended up having ice-cream and chocolates.

Thereafter we went to H11 and were officially treated by Rachel (tho’ I don’t know who paid!) for maggi 🙂

I gave a small introduction of today’s play what I knew but didn’t create a big impression as I didn’t have much expectation myself. Me, Garima and Arti did end-up watching the play and we liked it so much that we were in that trance for almost an hour after that!

Dinner and the rest
We had dinner at Gullu and then a nice walk till the main gate, all of us. It was great! I had a splendid time. Hope to have more such encounters in the future!

Day 1:
Juggling Workshop
DAY 2:
Got up very late today. Participated in a Photography competition “Papparazzi”; Disha was the celebrity and I was a Papparazzi. And then Pool Side Dance Party!… It was not as nice as last time but it became fun later on..
ProNight: Classical Night
“Event jab tak Pure Classiscal tha, to jyada chamka nai. Fir gazal singer aaya, aur Jhulelaal bajaya to khoob mazaa aaya!”
DAY 3:
What a day! One of the best experiences at Moodi, ever!
I had planned to do a bank robbery ‘the Heist’ and then attend the DJing workshop.
Unfortunately I didn’t get a chance to do anything at the Heist. We started discussin and forgot to complete the obstacle track in time. So we got disqualified! 😛
The Djing workshop was good. I got hands on at the Pioneer NewAge Mach3. We attempted to catch the first beat of every a bar in a track. We also saw a demo of some good mixing.
They had a Rock Climbing Wall and an obstacle course at the NCC grounds. There was also a mental task to be performed alongwith.
I also got a Tatoo today!
<photo>
ProNight: Fusion Night
Raghav Sachar and Alms for Shanti
Convo:
A brillian performance by folks from Israel! Fantastic Music using unconventional tools. Exhilarating performance! I can’t explain it!
<videos>
NCC Roads:
Bike Stunt Performance
Day 4:
Nunchak Workshop. Good tricks, but it was too short.
The Workshop was good. Fir time pass raha. Attended an International Music performance.
< videos >
Doston ke saath masti ki. Aur Mess mai pani puri khai. Aur haan, I finally Climbed the OldSpice Rock Climbing Wall. Tried the obstacle course with Sagar: rock climbing wall, 8.5feet NCC wall and balance walking. It was fun! 🙂

We all were at OAT  for H11 Valfi (Valedatory function). People were dressed up for party and the music was on. Enthu junta were having a gala time dancing near the DJ’s Dance Floor. Of course once I was discovered by my gang, there was hardly any chance of me staying out of the dance circle.

Viral landed in OAT soon after. He was a lil reluctant to join us at first. But the right amount of persuation (or bias voltage) coupled with good bhangra music  (ie; input gate current) at right rising edge of the correct clock cycle triggered the transisters into a high gain amplifier. We didn’t step off the floor after that!

It was good fun dancing! Meeting new people. Checking out chicks with Thaker – while having all the tasty desserts! Yum… 🙂

We were not done yet. As if the desserts and chicks were not enough 10 of us from Syscon and EE decided to head towards StaffC for cold drinks. Walking down, pulling each others’ legs and enjoying the wonderful moonlit eve. We had Limca and Apple juice I guess.

We met two new friends there, Ankit and some other guy I don’t know. Viral and I found the night too enticing and decided to suggest the gang for a walk near the lake side. And so we did.. Dani was acting lazy but he soon got into the mood along with most of us – after a little bit of persuasion & teasing of course!

The lake side was beautiful; Peaceful and quiet. It was dark with only the moon lighting the path. We saw huge bats and gave homage to Batman! 😉

It was very scenic I should say. I wish I had a camera there. The view to Hiranandani was just picture perfect!  I could have made a Manhattan skyline out of it! May be next time, Viral is already enthu about making another trip there.

Well, back to the crowd. Jhelum wanted to play Antakshri and I suggested DumbC. But ideas were almost dropped when Nikhil shot a “kirmakov Theorem – ab ‘M’ se bolo” and the IITian Antakshri went into play. It was a hard time getting off Laplace-Ass jokes and everyone, including Hussain was contributing! 🙂

We soon got back. Tho’ I wasn’t in a mood to leave. I knew a few others who shared the same view but well, “Saare meri tarah velle thodi hote hain!”

All in all, it was a wonderful awesome evening! I am lookin forward to such gala days in the future! “Bas yeh exam to khatam ho jaaye!” 😉